The 27th annual Philadelphia Film Festival kicks off this week with the screening of Ben is Back starring Julia Roberts and Lucas Hedges as mother and son who are grappling with a history of addiction.

The story is ripped from the headlines as Philadelphia struggles to deal with the opioid drama unfolding on the streets of Kensington.

From our powerful, socially relevant and incredibly timely Opening Night screening of Ben is Back to the definitive look at Philadelphia music legend Teddy Pendergrass for our Closing Night selection, and the incredibly diverse line-up in-between, the films premiering in this year’s Festival will be discussed and remembered for a long time to come.

Andrew and I have been doing this together for ten years and I love that we continue to find fresh, unique films that delight and challenge audiences. I’m so proud of the program the team has put together and I can’t wait to share the adventure we have in store for you.

What’s in store is a lineup of more than 100 films over 11 days. As a curator of art, technology and social change content, my must-see films include:

The film is based on a true friendship. Art also imitates life. Before passage of the Civil Rights Act of 1964, African American motorists used the “Green Book” travel guide to vacation without humiliation. 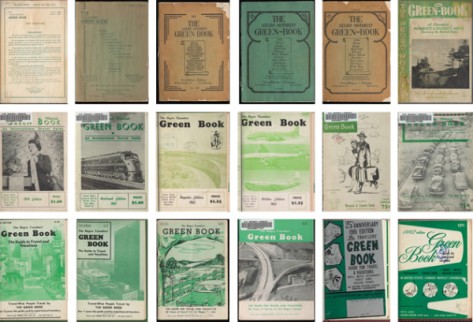 The Closing Night film, Teddy Pendergrass: If You Don’t Know Me, tells the untold story of Philadelphia’s legendary R&B singer whose “For Women Only” concerts were the stuff of, well, legends.

To view the full schedule and purchase tickets, go here.

Earlier this month, I attended a panel discussion on “Art in Public Space” held in the Hamilton Garden of the Kimmel Center. As I waited for the program to start, I checked out the view from the top floor. What I saw left a hole in my heart. 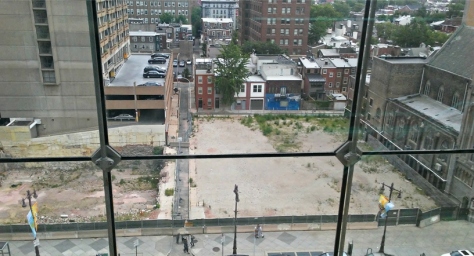 The hole is where Philadelphia International Records once stood. 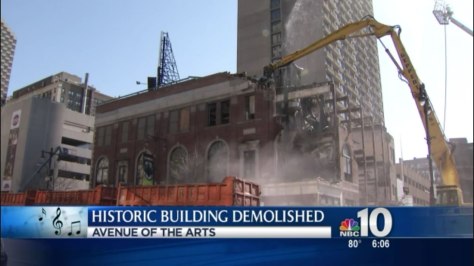 Kenny Gamble and Leon Huff have earned their place in history. 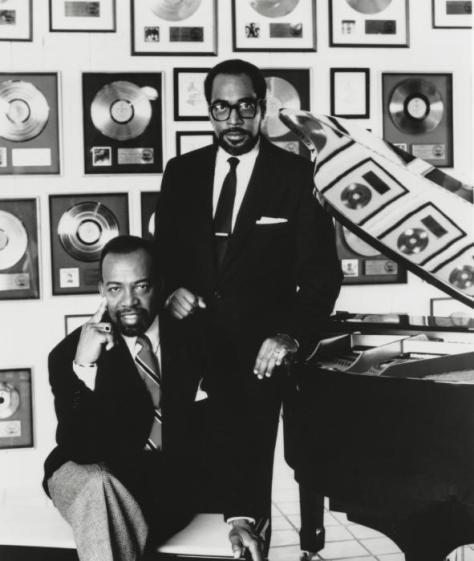 Sadly, the building that held the stories of the songwriters, musicians, producers and arrangers is now lost to history. For the love of money, African Americans’ cultural heritage was erased from public memory.

Gamble and Huff sold the historic building to Dranoff Properties which plans to build a luxury hotel and condos for the one percent. Three years after the demolition of “309,” there’s just a hole in the ground. The reason: Dranoff Properties is waiting for a corporate welfare check to the tune of $19 million before breaking ground on the “biggest, tallest and most expensive” project the company has ever done.

In the poorest big city in the country, spending taxpayers’ money to further enrich the rich is the sound of Philadelphia.

Pianist Orrin Evans played gigs at Chez LaBelle during the spring. From the Oct. 31, 1994 issue of Jet Magazine: 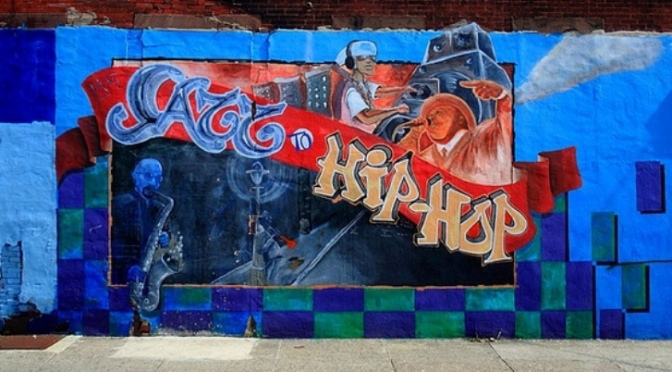 Hip-hop artists are influenced by that which came before. Like beboppers, they have created their own language and culture. Beboppers improvised. Hip-hop artists freestyle.

In an interview with West Philadelphia Music, a project of the University of Pennsylvania School of Arts and Science, jazz drummer Lucky Thompson said:

Uhh, yeah! Yeah, because it’s all improvisation. Like what they do, they call a rap, a rap is nothing new. Rappers, well, they was doing that back in the forties. That’s not, you know, that’s not new, that’s not new. That used to be a hip talk back then. You know, skeealeebop skeetaleebop babop la-deh-da, you know, that’s old. That’s not—that’s new to them, you know, but it’s not nothing new. It’s been out—it’s been here for a while, and they just called it scatting or talking jive—they would call it talking jive. So that’s, you know, and then cuz like, you can use it—they like now, you see, they using a lot of—they go to Europe, they take a lot of the traditional jazz music and put hip hop beats and everything right over the top of it. And they dance to it, you know, I was really—I was really shocked when I heard it when I went to Europe I was like, “Wow, they playing [Col]trane?” And they got them dancing you know, but it had like a hip hop—a hip hop beat, you know. But it was deep, it was deep, I swear it was deep.

Still, for some jazz purists, the only thing bebop and hip-hop have in common is “they rhyme.” While their heads are stuck in rarified air, Ahmir “Questlove” Thompson dropped some knowledge in the liner notes for “Droppin’ Science: Greatest Samples From The Blue Note Lab”:

The one that makes me the proudest, of course, is my hometown champ (and the greatest, funkiest, and most precise DJ ever!), DJ Jazzy Jeff, who lived up to his name in 1986 with a ditty called “A Touch of Jazz,” a compiled cram session of ’70s funk/jazz trivia looped and scratched to perfection. It was the “DJ cut” — remember those? — on his debut album, Rock the House (along with an MC I haven’t heard from in eons? Any locale for a Will Smith? Anyone? . . . lol).

Enter Idris Muhammad, a crucial general in the Blue Note army that was key to crossing the prestigious jazz label over to the soul side of thangs. That was how I got sucked into Bluebreaks. Same jazz outlook, just a lil’ funkier, to reach the corners of the ghetto that an otherwise (still worthy) Jackie McLean or a Horace Silver couldn’t penetrate. Idris’s drums had equal influence on me just as strong as if he were playing the role of John “Jabo” Starks or Clyde Stubblefield in the James Brown band.

Anyhow, they [hip-hop artists] take little pieces of some things that were written in the bebop era, post-bebop era, and they make little licks out of it and they use it. That’s good that some people, they listen to hip-hop. So, hip-hop is like bebop was back then, revolutionary movement. This business of rapping, I used to do that in the schoolyard when I was twelve years old.

In tandem with the visionary production team of Kenny Gamble and Leon Huff, arranger and producer Thom Bell was among the principal architects of the lush and seductive Philly soul sound, one of the most popular and influential musical developments of the 1970s. Born in Philadelphia in 1941, Bell studied classical piano as a youth; he joined Gamble’s harmony group the Romeos in 1959, and by the age of 19 was working as a conductor and arranger for hometown hero Chubby Checker. Within months he began writing original material for Checker as well, eventually joining the singer’s production company. When Checker’s organization folded, Bell signed on as a session pianist with Cameo Records, where he first worked with the local soul group the Delfonics. When their manager Stan Watson formed the Philly Groove label in 1968, Bell came aboard as a producer, helming Delfonics classics like 1968’s “La La Means I Love You” and 1970’s “Didn’t I Blow Your Mind This Time.”

In tandem with his partner Leon Huff, producer and songwriter Kenny Gamble was the principal architect behind the lush and seductive Philly Soul sound, one of the most popular and influential musical developments of the 1970s.

Native Philadelphian Kenny Gamble first teamed with Leon Huff during the late ’50s while a member of the harmony group the Romeos, a unit which also included another aspiring area musician named Thom Bell, who would become crucial to Gamble’s later success. “The 81,” a 1964 single by the little-known Candy & the Kisses, was the inaugural Gamble-Huff co-production, and three years later the duo scored their first Top Five pop hit with the Soul Survivors’ “Expressway to Your Heart.” Soon recruiting Thom Bell as arranger, they subsequently scored with smashes including Archie Bell & the Drells’ “I Can’t Stop Dancing” and Jerry Butler’s “Only the Strong Survive,” gradually forging their own distinctive sound. 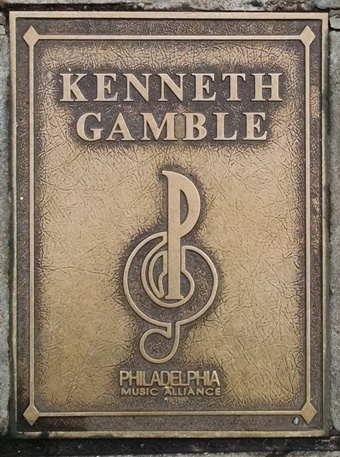 In tandem with his partner Leon Huff, producer and songwriter Kenny Gamble was the principal architect behind the lush and seductive Philly Soul sound, one of the most popular and influential musical developments of the 1970s.

Leon Huff started his musical career as a session pianist, and played on sessions for Phil Spector, the Ronettes, and Carole King in New York City before moving to Philadelphia. He formed the Locomotions, and did sessions for Cameo and Swan. Huff earned his first hit as a composer writing “Mixed-Up Shook-Up Girl” for Patty & the Emblems in 1964.

Native Philadelphian Kenny Gamble first teamed with Huff during the late ’50s while a member of the harmony group the Romeos, a unit which also included another aspiring area musician named Thom Bell, who would become crucial to Gamble’s later success. “The 81,” a 1964 single by the little-known Candy & the Kisses, was the inaugural Gamble-Huff co-production, and three years later the duo scored their first Top Five pop hit with the Soul Survivors’ “Expressway to Your Heart.” Soon recruiting Thom Bell as arranger, they subsequently scored with smashes including Archie Bell & the Drells’ “I Can’t Stop Dancing” and Jerry Butler’s “Only the Strong Survive,” gradually forging their own distinctive sound.

The MFSB Orchestra was comprised of musicians handpicked by producers Kenny Gamble, Leon Huff and Thom Bell to be the house band for their recordings. It was the band that recorded the music tracks for the likes of Harold Melvin & the Blue Notes, the O’Jays, the Stylistics, the Spinners, Lou Rawls, Billy Paul and a host of others. A well-oiled machine with talent and enthusiasm so special that the group had to be given its own opportunity in the spotlight. Gamble & Huff did just that in 1973 by officially making the MFSB (Mother Father Sister Brother) Orchestra recording artists in their own right. The MFSB Orchestra quickly became an exciting melodic hybrid of swing, classical, jazz and R&B that went on to Grammy winning gold and platinum success.