In the 1920s, jazz became the soundtrack for the revolution in manners and morals that was sweeping the nation. In New York’s Harlem, South Philadelphia, the south side of Chicago, Pittsburgh’s Hill District and other northern cities, urban African Americans known as the New Negroes were finding expanded opportunities and new identities. One of the first singers to give voice to this new generation was Chester, Pennsylvania’s Ethel Waters, the first recording star of the African-American-owned Black Swan Record Company. 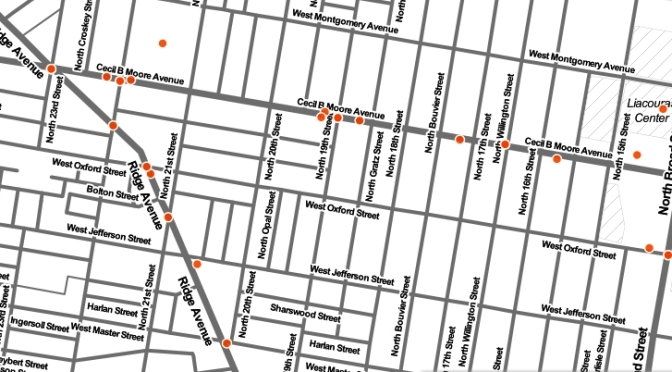 The biggest concentration of bars and clubs frequented by blacks and offering Jazz was along Columbia Avenue (later renamed Cecil B. Moore Avenue). Among what as upwards of fifteen different venues were the Crystal Ball, 820 Club, Spider Kelly’s, Watts Zanzibar — one of the few black owned venues—and the North West Club. [Lee] Morgan played at many of these with groups made up of his peers. The trumpeter Cullen Knight remembered seeing Morgan at the North West, leading a band consisting of tenor saxophonist Odean Pope and a rhythm section of McCoy Tyner, Reggie Workman and Ronald Tucker.

Both the Zanzibar and North West were private clubs, and these were often keener to employ, under-age musicians than other venues; in addition, removed from some off the commercial concerns of the regular bars, they were thought of as sites for some degree of experiment among young musicians, as ‘hardcore’ bebop clubs where players could cultivate their jazz improvisation without needing to make concessions to dancers or casual listeners. Private venues would often pay the musicians a decent nightly fee, often around $10.

In Whisper Not: The Autobiography of Benny Golson, the NEA Jazz Master recalled his days on the Golden Strip with John Coltrane:

On jam days—Saturday afternoons between four and seven—John and I started at one end of Columbia Avenue, where most of the clubs were located, and proceeded toward the other end. We played at each club for an hour, then moved to the next. If we didn’t get to a particular club, we started there the following week. These clubs were small, on the ground floor of apartment houses or in storefront slots, long and narrow. 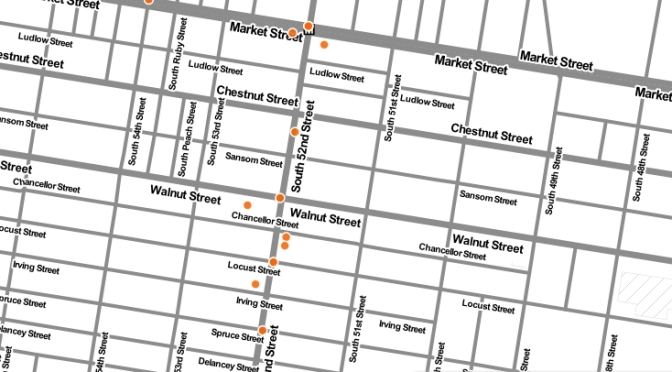 “The Golden Strip” in North Philly was on Columbia Avenue, now named Cecil B. Moore Avenue in honor of the legendary civil rights lawyer. Back in the day, Moore also spent time in West Philly on 52nd Street, aka “The Strip”:

In addition to being a civil rights leader, a community activist and a politician [Cecil B.] Moore found time to party with some of the era’s most fascinating people. His favorite stomping ground was West Philadelphia’s 52nd Street Strip, a reinvigorated area of bars and nightclubs where “blacks began buying the drinking establishments formerly owned by whites.

During Philadelphia’s golden age of jazz, there were jazz clubs in every neighborhood. There were so many that folks in North Philly didn’t go to joints in South Philly and vice versa. There were a handful of clubs that reached legendary status and attracted patrons from all over the city. The Blue Note at 15th Street and Ridge Avenue was “the town’s swankiest jazz emporium.”

Jazz venues are broadly defined. Tenor saxophonist Bootsie Barnes said, “Back then, a jazz club became a jazz club as long you had jazz played in it.”

There were four jazz corridors — Golden Strip, Ridge Avenue, The Strip and South Street. From ExplorePAHistory.com:

In the early years of the twentieth century, the church and concert based musical culture of black

Philadelphians was challenged by the popularity of a new, high energy, uptempo, loud, and improvisational music coming up from the South. At first, respectable churchgoing families looked down upon “jazz,” but the music had a life of its own, and its performers and audiences had little use for what they considered antiquated notions of respectability.

In the 1920s, jazz became the soundtrack for the revolution in manners and morals that was sweeping the nation. In New York’s Harlem, South Philadelphia, the south side of Chicago, Pittsburgh’s Hill District and other northern cities, urban African Americans known as the New Negroes were finding expanded opportunities and new identities. One of the first singers to give voice to this new generation was Chester, Pennsylvania’s Ethel Waters, the first recording star of the African American-owned Black Swan Record Company.

Jazz has always been an improvisational and constantly evolving music. A new wave of African American migration to Philadelphia during the Second World War helped set the stage for a jazz renaissance in the City of Brotherly Love. Jazz greats Dizzy Gillespie, John Coltrane, and the Heath Brothers all came to Philadelphia from the Carolinas. The legendary Billie Holiday was born in the city. The musical ferment of the 1940s and 1950s in Philadelphia was similar to the explosion of jazz and pop music in the 1920s, especially within the black community.

At the dawn of the twenty-first century, jazz is once again entering a new period of musical synthesis and experimentation. Philadelphia continues to boast more than its share of innovators and virtuosos, including Jamaaladeen Tacuma, Bobby Zankel, Uri Caine, Ahmir Thompson and many others. With its rich musical cultures and vibrant jazz scene, Philadelphia promises to build upon its rich history as a center of jazz innovation.