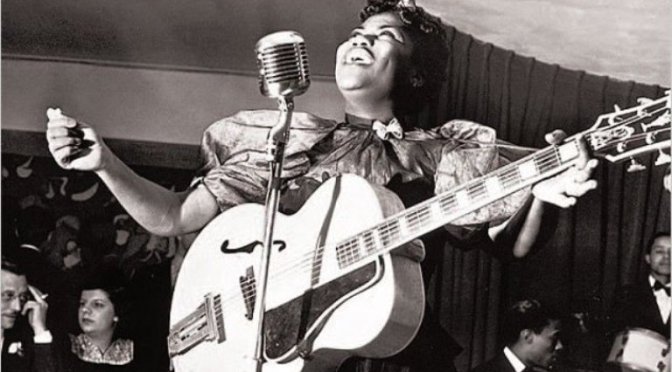 The story of Sister Rosetta Tharpe is coming to the stage on Broadway. The guitar virtuoso played with jazz greats, including Cab Calloway, Count Basie, Benny Goodman, Lucky Millinder and Duke Ellington.

Shout, Sister, Shout! is the story of the trailblazing performer Sister Rosetta Tharpe who influenced scores of popular musicians, from Elvis Presley, Johnny Cash, Little Richard, Eric Clapton and Etta James. Rosetta Tharpe was gospel music’s first superstar. A guitar virtuoso with a clear, ringing voice, she took the rich musical traditions of Black Pentecostal churches and made music for the world to enjoy. Audiences adored her and said she played guitar “like a man” — even though men learned a thing or two from her.

Before we had the phrase “women in rock,” Rosetta rocked churches, tent-meetings, revivals, dance clubs, stadiums, and concert halls — from Carnegie Hall to the Grand Ole Opry. Her remarkable journey–from Cotton Plant, Arkansas to an acknowledged influence on Elvis Presley, Johnny Cash, and a generation of British rockers–shows how a black female gospel musician was an essential player in the development of rock-and-roll. She is a pioneer and considered by many to be “The Mother of Rock and Roll.” 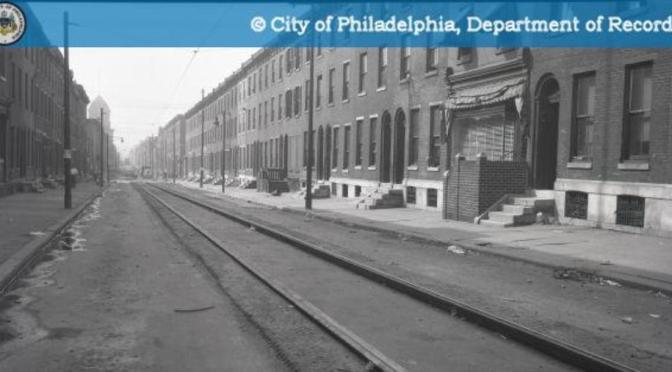 When 18 year old John Coltrane moved to Philadelphia, in 1943 the nation’s third largest city, he entered a fundamentally different world from his hometown of High Point, N.C. Like many African-Americans who migrated to major cities of the North, Coltrane joined older family members and friends already settled there. They lived in an apartment at 1450 N. 12th Street between Jefferson and Master Streets in an area since demolished for the Yorktown Urban Renewal project.

Regular bars were open from 9pm to 2am. Jazz musicians would hang out at the Woodbine Club from 3am to 7am. Musicians would have jam sessions where they would hone their craft and network to get gigs.

I think the first time I heard Trane was around 1954. There was a place on 12th Street called the Woodbine Club. During that period people like Jimmy Oliver, Jimmy Heath, Red Garland, Shuggie Rose, Philly Joe Jones, those were the pioneer musicians during that period. And it was a place, an after hours place where they had entertainment, say from say twelve o’clock until around five in the morning. That was like Friday, Saturday, and Sunday. It was a sort of collaboration place where all of the musicians would come and exchange ideas and jobs. So this particular night it was Hassan Ibn Ali, Donald Bailey – some very fine percussion. They had sort of invited me along to go with them. And Trane, Jimmy Oliver, Jimmy Heath, Wilbur Cameron, Bill Barron, all of the musicians came there after they got off work and that was the most enlightened experience in my whole life, I think, of seeing so many wonderful musicians come together collectively and exchange ideas as well as perform.

Sister Rosetta Tharpe was inducted into the Philadelphia Walk of Fame in 2017.

Alongside Willie Mae Ford Smith, Sister Rosetta Tharpe is widely acclaimed among the greatest Sanctified gospel singers of her generation; a flamboyant performer whose music often flirted with the blues and swing, she was also one of the most controversial talents of her day, shocking purists with her leap into the secular market — by playing nightclubs and theaters, she not only pushed spiritual music into the mainstream, but in the process also helped pioneer the rise of pop-gospel. Tharpe was born March 20, 1915 in Cotton Plant, AR; the daughter of Katie Bell Nubin, a traveling missionary and shouter in the classic gospel tradition known throughout the circuit as “Mother Bell,” she was a prodigy, mastering the guitar by the age of six. At the same time, she attended Holiness conventions alongside her mother, performing renditions of songs including “The Day Is Past and Gone” and “I Looked Down the Line.”

In time, the family relocated to Chicago, where Tharpe began honing her unique style; blessed with a resonant vibrato, both her vocal phrasing and guitar style drew heavy inspiration from the blues, and she further aligned herself with the secular world with a sense of showmanship and glamour unique among the gospel performers of her era. Signing to Decca in 1938, Tharpe became a virtual overnight sensation; her first records, among them Thomas A. Dorsey’s “Rock Me” and “This Train,” were smash hits, and quickly she was performing in the company of mainstream superstars including Cab Calloway and Benny Goodman. She led an almost schizophrenic existence, remaining in the good graces of her core audience by recording material like “Precious Lord,” “Beams of Heaven,” and “End of My Journey” while also appealing to her growing white audience by performing rearranged, uptempo spirituals including “Didn’t It Rain” and “Down by the Riverside.”