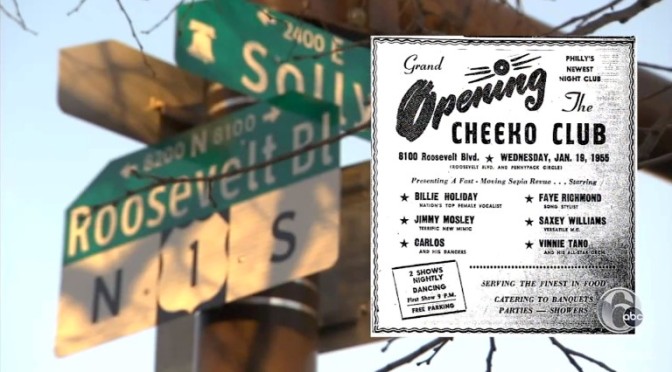 The Cheeko Club opened on January 19, 1955 in a space formerly occupied by Philadelphia ShoBar. Billie Holiday was the headliner.

Harry Cherry, owner of the Mermaid Bar on Germantown Ave., is presenting Billie Holiday, better known as “Lady Day” in the opening show.

“Lady Day,” who has long been a favorite in Philadelphia, has for years been top female vocalist in polls across the country. 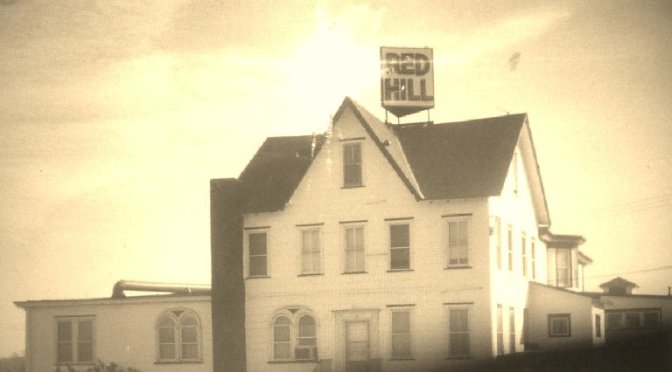 The Red Hill Inn was located in Pennsauken, New Jersey. 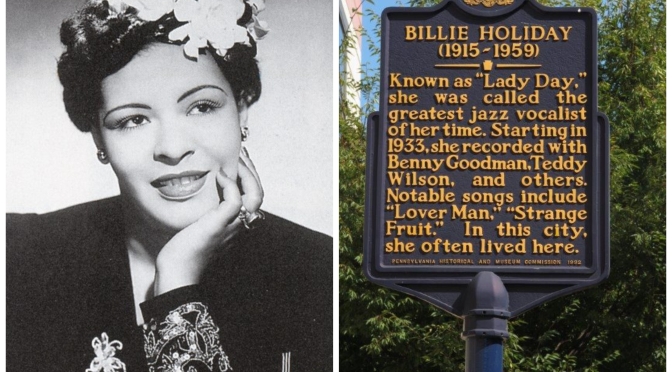 Billie Holiday, née Eleanora Fagan, was born on April 7, 1915 at Philadelphia General Hospital. “Looking for Lady Day,” hosted and written by news anchor Tamala Edwards, is a fact-based portrait of the iconic singer who changed the game on and off stage.

The walking tour ends at the Attucks Hotel (distance: 0.7 miles).

The stops include the Academy of Music, Billie Holiday Walk of Fame plaque, and sites of the Fantasy Lounge and South Broad Street USO.

We also stop at hotels where Lady Day stayed, including the hotel where she and her husband, Louis McKay, were arrested. The arrest is depicted in the biopic United States vs. Billie Holiday.

Our next-to-last stop is the Green Book site where Billie Holiday performed four months before her death. Emerson’s Tavern is the setting for the Broadway play, “Lady Day at Emerson’s Bar and Grill.” Audra McDonald won the 2014 Tony Award for Best Performance by an Actress in a Leading Role in a Play.

It has been nearly 62 years since Billie Holiday passed away. Hundreds of dissertations, books, films and documentaries later, she is a blank canvas onto which fans and detractors project their hopes, dreams and issues. I see a strong Black woman whose back did not bend.

From an early age, Billie was failed by the institutions that should have protected her. She was racially profiled and harassed by the FBI and hounded by the Philadelphia Police Department. From where Billie sat, the whole of the United States was arrayed her. But still she persisted. She didn’t give a damn what folks thought about her drug abuse, sexuality or string of no-good men.

Billie was a popular club artist and concert artist but she harbored no illusion about her audiences. She famously said, “They come to see me fall on my ass.” While there, she demanded their attention when she sang “Strange Fruit,” the anti-lynching protest song that took a toll on her livelihood and ultimately her life.

The Billie Holiday historical marker at 1409 Lombard Street piqued my interest in investigating her story beyond the marker. One of Billie’s Philadelphia stories is told in the new biopic starring Andra Day and directed by Lee Daniels.

The United States vs. Billie Holiday is now streaming on Hulu.

Located on the corner of 16th and South streets, Budweiser played host to, among others, Count Basie, Nat King Cole and Sarah Vaughan. According to saxophonist Sam Reed, Billie Holiday performed here.

Former mayor and police commissioner Frank Rizzo was sued by the Justice Department for a pattern of police brutality that shocks the conscience. Rizzo died on July 16, 1991. He was born again eight years later in the form of a 10-foot monument commissioned by Rizzo family and friends.

The Frank L. Rizzo Memorial Committee decided to place the statue in front of the Municipal Services Building. They also decided it would be unveiled on New Year’s Day 1999 after the Mummers Parade, an event best known for clowns prancing around in blackface. 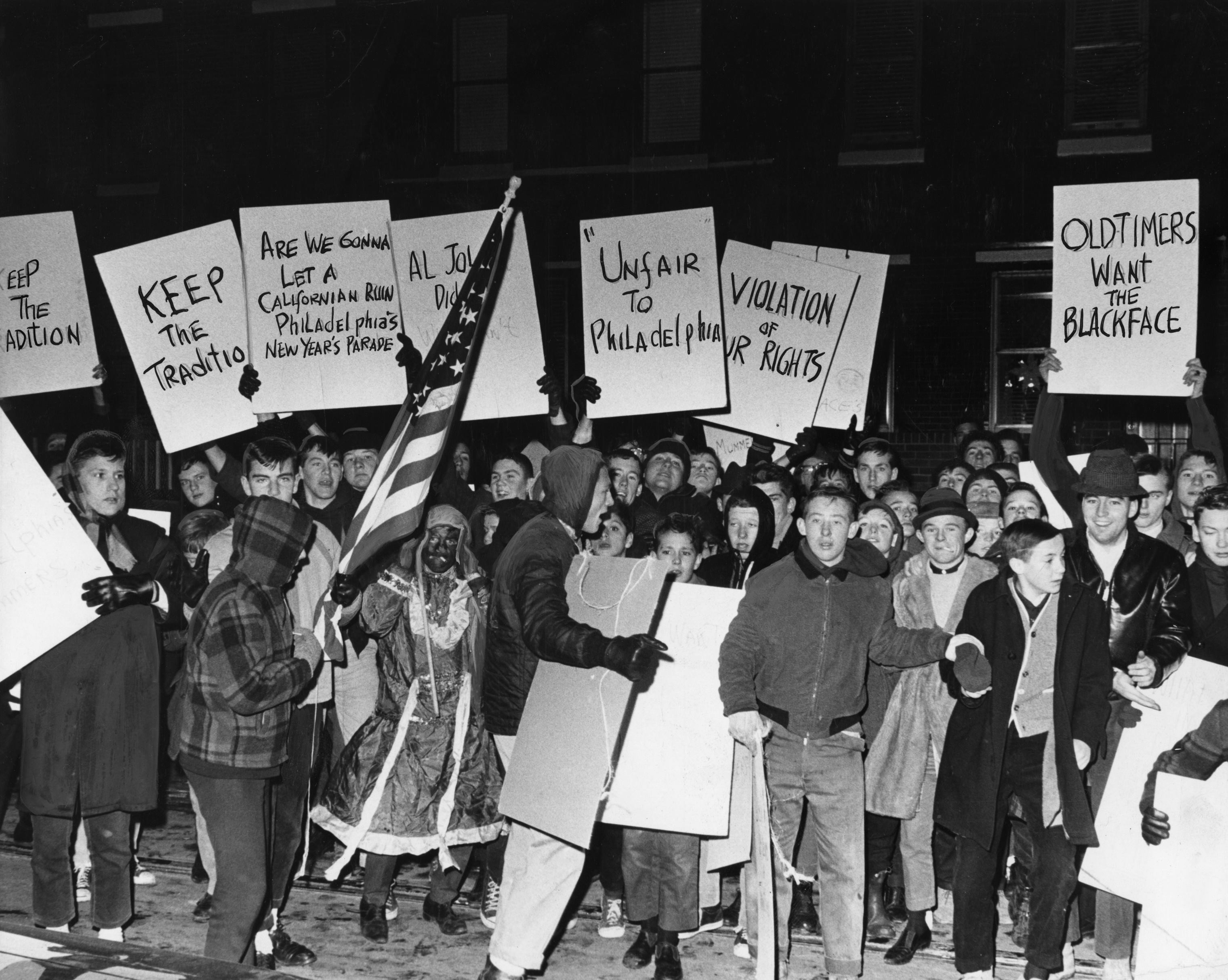 Almost from the moment the hunk-of-junk was unveiled, African Americans and allies peacefully protested for its removal from the gateway to municipal services. Fast forward to 2017, Mayor Jim Kenney said it would be removed by May 2018. Then he said by 2021. Then Kenney said the statue would not be moved before 2022. On May 30, 2020, demonstrators tried to topple it.

Realizing the jig is up, Kenney said the statue would be removed:

The way its engineered, it’s bolted into the stairs and under the stairs is the concourse where people get their permits and pay their taxes. We didn’t want to tear that up until we did the entire place. We’re going to move it, hopefully in about another month or so. We’re going to accelerate the removal.

The protests accelerated the removal. Rizzo was hauled away three days later. As for the concourse under the stairs, who are we to believe – Kenney or our lying eyes? 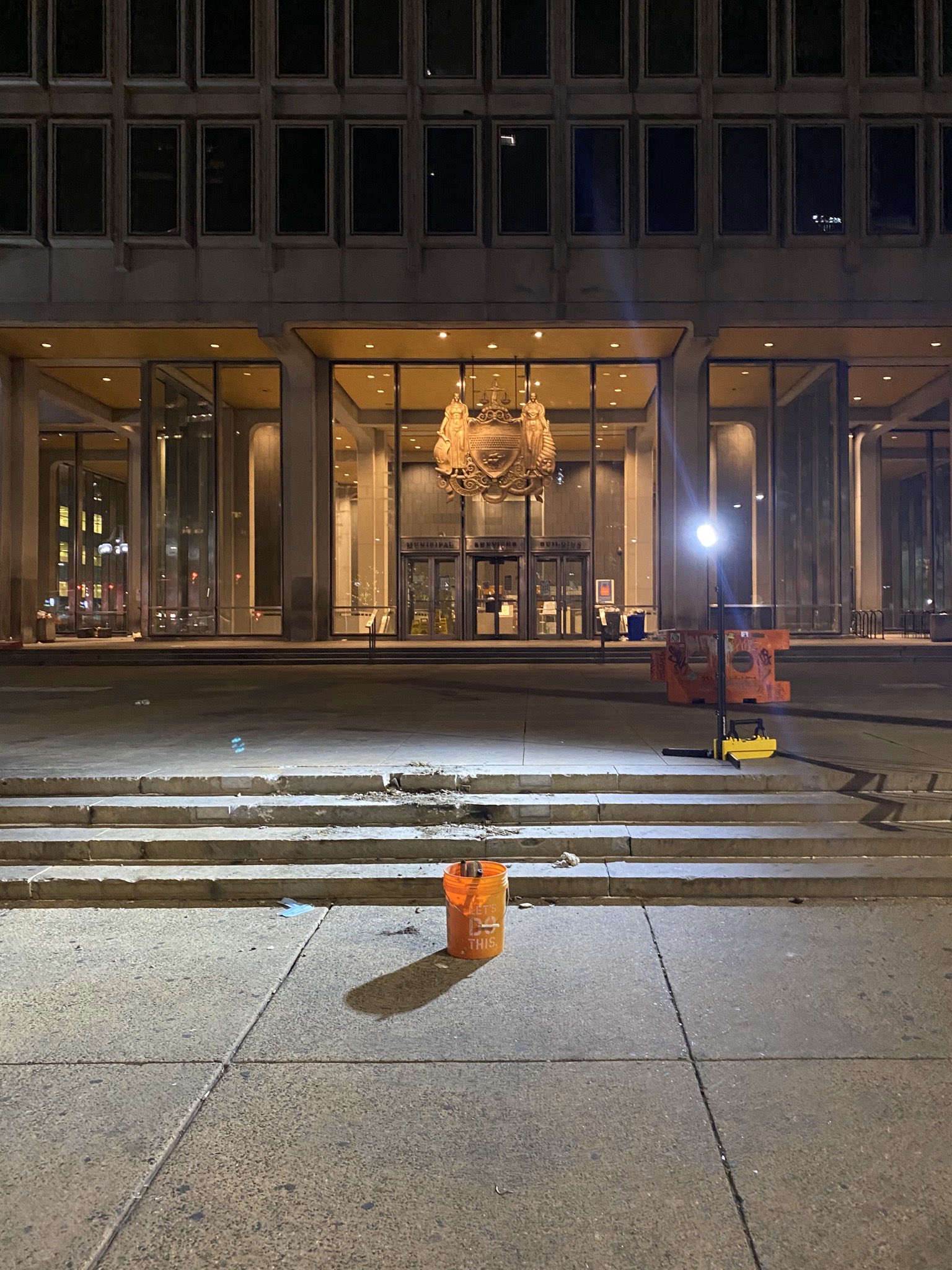 Kenney’s lie was compounded by his spokesperson Michael Dunn:

The statue is bolted into the infrastructure of the plaza, which is also the roof of the underground concourse. Removing it while ensuring the integrity of that infrastructure will be a complicated task.

It was such a complicated task the statue was removed under the cover of darkness.

For more on the take down of Frank Rizzo, check out my essay, “The Rizzo reign is finally over. Thank Black Philadelphia.”

In my op-ed, “3 Black Philadelphians whose statues should replace Frank Rizzo” published in The Philadelphia Inquirer, I suggested a memorial to Philly native Billie Holiday, who was harassed by then-Police Captain Rizzo, would be poetic justice. In 1939, Lady Day told the world black lives matter.

March is Women in Jazz Month, a time to celebrate and recognize the contributions of women to jazz. As a lifelong activist, I want to celebrate women who used music as a platform for social change.

Ethel Waters’ “Supper Time” is not as well-known. Written by Irving Berlin especially for Waters, the song is about a wife’s grief over the lynching of her husband.

Ella Fitzgerald broke down racial barriers. On October 7, 1955, the “First Lady of Song” performed with the Jazz at the Philharmonic in Houston. The concert tour was produced by her manager Norman Granz, an ally in the fight for racial justice. The Music Hall had “Negro” and “White” labels on the bathroom doors. Shortly before the show, Granz removed the labels.

Houston’s segregationists were angry about Granz’s attempt to integrate the show by refusing to pre-sell tickets. Some whites asked for a refund rather than sit next to an African American. After the first show, the police stormed Fitzgerald’s dressing room and arrested her, trumpeter Dizzy Gillespie, saxophonist Illinois Jacquet and other musicians on trumped-up charges. 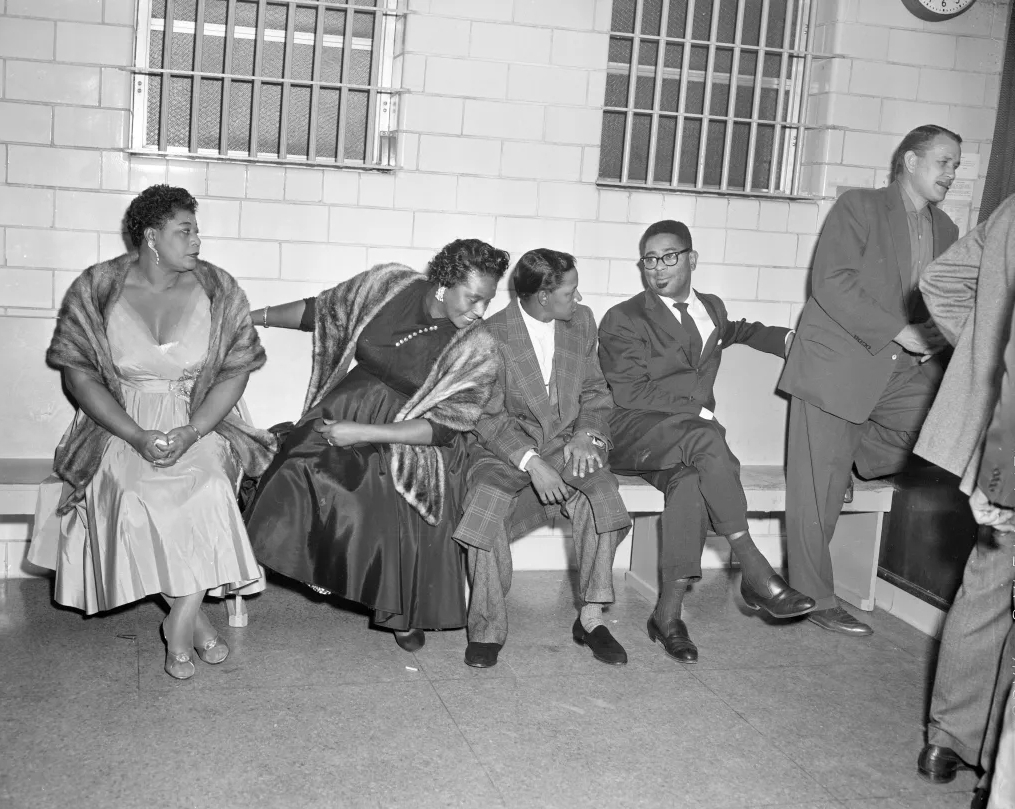 With the intervention of her friend, actress Marilyn Monroe, Fitzgerald was the first African American to perform at the legendary Mocambo nightclub.

Simone’s celebration of black excellence inspired a new generation of civil rights activists, including the writer.

To us in America, the reflections of Armistice Day will be filled with solemn pride in the heroism of those who died in the country’s service and with gratitude for the victory, both because of the thing from which it has freed us and because of the opportunity it has given America to show her sympathy with peace and justice in the councils of the nations.

November 11 commemorates the armistice agreement Allied powers signed with Germany bringing hostilities to an end on the “eleventh hour of the eleventh day of the eleventh month” of 1918.

Just six years earlier, President Harry S. Truman signed Executive Order No. 9981 establishing the President’s Committee on Equality of Treatment and Opportunity in the Armed Services. The EO signaled the government’s commitment to integrate the military.

Parker Hall was on the top floor of the Parker Building. 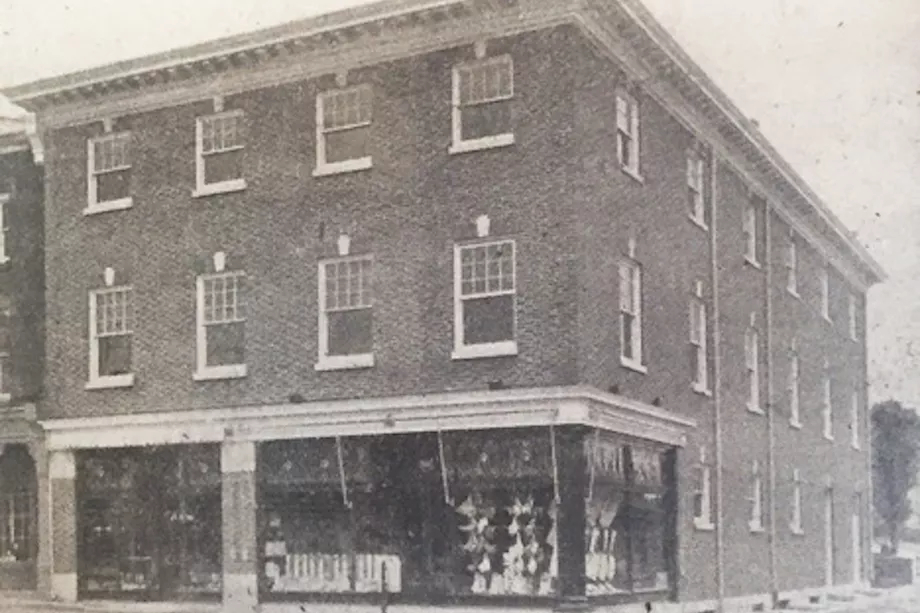 The Parker Building is now home to the ACES Museum whose mission is to preserve the history of World War II veterans and restore Parker Hall as a functioning USO for black veterans and their families. The ACES Museum is headquarters of the Philadelphia Chapter of the National Association of Black Veterans.

March is Women in Jazz Month, a time to celebrate the contributions of women to jazz. Few – male or female – have contributed more to the jazz canon than Billie Holiday. In the decades since her death, Lady Day has been celebrated in film, song, books, fashion and art.

ClickitTicket, a resale marketplace, has created a timeline of Billie Holiday’s life, beginning with her birth in Philadelphia in 1915 and ending with her death in a New York City hospital in 1959.

Billie Holiday’s voice was a little thin and somewhat limited. She had no technical training; she couldn’t even read sheet music.

Yet, Holiday is one of the greatest vocalists of all-time.

What she lacked in power and tone, she made up for it with the ability to tell a story and emote. Every song she sang she made her own.

Holiday was a true artist who had a profound impact on both jazz and pop music.

She made a huge impact on countless artists including Frank Sinatra.

“Lady Day is unquestionably the most important influence on American popular singing in the last twenty years,” explained Ol’ Blue Eyes to Ebony magazine in 1958.

Despite personal demons, abusive romantic relationships, and the specter of racism, Holiday achieved commercial and artistic success during her lifetime.

Since her death in the late 1950s, generations of musicians have turned to her recordings for inspiration and enlightenment.