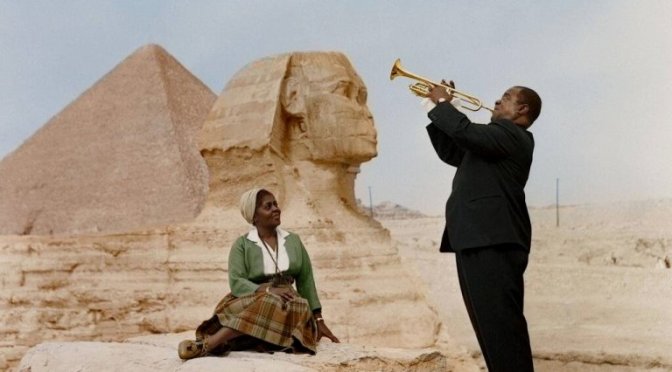 “The Jazz Ambassadors” tells the story of when the U.S. State Department asked jazz icons to travel the world as cultural ambassadors during the Cold War. Their mission was at the intersection of race, civil rights and public diplomacy.

The film premieres on May 4, 2018 on PBS. Check your local listings.

In his opening remarks at the International Jazz Day global concert at the White House, President Barack Obama said:

Jazz is perhaps the most honest reflection of who we are as a nation. Because after all, has there ever been any greater improvisation than America itself? We do it in our own way. We move forward even when the road ahead is uncertain, stubbornly insistent that we’ll get to somewhere better, and confident that we’ve got all the right notes up our sleeve.

That “honest reflection of who we are as a nation” became an instrument of cultural diplomacy during the Cold War. Jazz musicians-turned-cultural ambassadors toured in more than 35 countries in Africa, Asia, Eastern Europe, Latin America and the Middle East. Jazz diplomacy was intended to win hearts and minds and promote a positive view of America as the land of freedom.

The irony of being ambassadors of freedom was not lost on jazz musicians who were treated as second-class citizens at home and subject to racial segregation.

As part of Jazz Appreciation Month, the USC Center on Public Diplomacy, the Public Diplomacy Council and the DC Jazz Festival presented a program on jazz and public diplomacy.

Americans underestimate the impact of jazz on audiences around the world. And in a way that contributes to the power of international tours by U.S. jazz musicians, including and especially tours sponsored by the U.S. State Department.

During the Cold War, America’s most prominent “jazz ambassadors” included Dizzy Gillespie and Louis Armstrong – at a time when segregation was the law of the land in much of the U.S. and the civil rights movement was at its peak. And that created a conflict for many of musicians.

“You had people being hosed down with fire hoses and dogs sicced on them, and you had these reports going out across the world,” said [Willard] Jenkins. “So it did create a real issue for many of the African American musicians who were selected to make those tours.”

Then Jenkins read from instructions given to musicians by the State Department: “‘Remember who you are and what you represent. Always be a credit to your government.’”