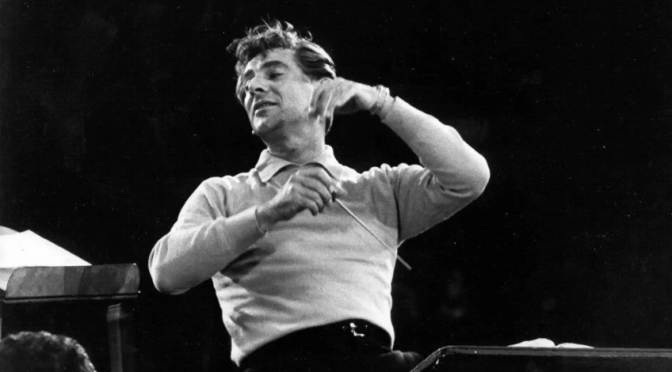 This year marks the centennial birthday of several jazz luminaries, including Ella Fitzgerald, Dizzy Gillespie, Lena Horne and Thelonious Monk. Philharmonic Laureate Conductor Leonard Bernstein was born on August 25, 1918 but the celebrations are already underway. The worldwide festivities will continue until August 25, 2019.

Bernstein had a longstanding appreciation of jazz, blues and spirituals. His 1939 Harvard University bachelor’s thesis was entitled, “The Absorption of Race Elements into American Music.”

From his earliest years, jazz was an integral part of Bernstein’s life, and it made a crucial impact on his own music.

As a teenager in the 1930s, he put together a jazz band, was famous for his jazz piano playing at parties, and directed a swing band at summer camp. Some of the jazz-inflected music he composed in the mid-1930s at Harvard, and later at Curtis [Institute], provided source material for future works. Perhaps most significantly, his undergraduate thesis was no less than an assertion that jazz is the universal basis of American composition. In New York soon after college, he got to know jazz intimately, by day transcribing for publication the improvisations of legendary players like Coleman Hawkins, and playing piano in jazz clubs at night.

About 15 years ago, I first saw this video of Bernstein conducting Louis Armstrong performing “St. Louis Blues” with the composer, W.C. Handy, in the audience. The images are forever etched in my mind.

On December 2, I will attend the Louis Bernstein Marathon at the CUNY Graduate Center, an eight-hour concert featuring performances of Bernstein’s most popular work. For me, the event is a mash-up of two of my passions: good music and historic preservation. The CUNY Graduate Center is located in the repurposed B. Altman & Co.

For Louis Bernstein at 100 calendar of events, go here.