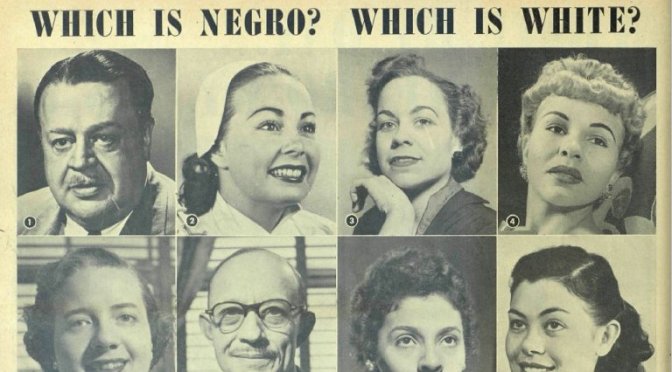 The April 1952 issue of Ebony magazine included a quiz, “Which is Negro? Which is White?”

The Preservation Alliance for Greater Philadelphia has nominated six blocks of Christian Street for designation as a “Black-themed” historic district. The notables who lived on that stretch, including architect Julian F. Abele, are largely unknown. According to his biographer, Abele did not identify as Negro; he classified himself “other.” Abele and his French wife lived at 1515 Christian Street. In 2021, African Americans are again asking, “Which is Negro? Which is White?”

The Preservation Alliance’s architectural historians claim that “between 1910 and 1945, the west side of Christian Street—from Broad to 20th—was ‘the social center of colored wealth and pride’ in Philadelphia.” Two white men crafted a narrative that flies in the face of decades of research by Black scholars, primary source documents, and African Americans’ lived experience. During the period of significance, “colored wealth” was concentrated among professionals. More doctors, dentists and lawyers lived on Lombard Street, and in West Philly and North Philly than on Christian Street. Colorism was the defining characteristic of the professionals who lived on so-called “Black Doctors’ Row.” Colorism is anti-Black racism by another name. By the way, when did the descriptor Black Doctors’ Row come into use? Before 1968, calling a Negro “black” would lead to a fight.

The myth of Black Doctors’ Row stems from a random article in the Philadelphia Tribune. In Black Bourgeoisie: The Rise of a New Middle Class in the United States, Dr. E. Franklin Frazier noted:

As for Christian Street’s bougie Negroes being the center of racial pride, don’t get me started. Instead, listen to Dr. Frazier:

Their emotional and mental conflicts arise partly from their constant striving for status within the Negro world, as well as in the estimation of whites. Moreover, they have accepted unconditionally the values of the white bourgeois world: its morals and its canons of respectability, its standards of beauty and consumption. In fact, they have tended to overemphasize their conformity to white ideals. Nevertheless, they are rejected by the white world, and this rejection has created considerable self-hatred, since it is attributed to their Negro characteristics. At the same time, because of their ambivalence towards Negroes, they are extremely sensitive to slights and discriminations which Negroes suffer. Since they do not truly identify themselves with Negroes, the hollowness of the black bourgeoisie’s pretended “racial pride” is revealed in the value which it places upon a white or light complexion.

I will oppose the Christian Street Historic District nomination when it comes before the Philadelphia Historical Commission. For now, I will share some observations of Lawrence Otis Graham, the foremost authority on the Black elite. In his New York Times bestseller Our Kind of People: Inside America’s Black Upper Class, Graham acknowledged:

Skin color has always played an important role in determining one’s popularity, prestige, and mobility within the black elite. It is hard to find an upper-class black American family that has been well-to-do since before the 1950s that has not endured family conversations on the virtues of “good hair, sharp features, and nice complexion.” These code words for having less Negroid features have been exchanged over time for more politically correct ones, but it is a fact that the black upper class thinks about these things more than most.

The Negro press also thought about skin color more than most. A large part of their revenue was derived from advertisements for skin bleaching products.

Graham’s kind of people — “the doctor-lawyer, high-church, high-yellow, Episcopalian crowd” — lived on Christian Street where the first meeting of Jack and Jill of America Inc. was held at the home of Marion Turner Stubbs who was married to Dr. Frederick D. Stubbs.

Graham grew up in Jack and Jill. In his chapter, “Jack and Jill: Where Elite Black Kids Are Separated from the Rest,” he wrote:

In its early years, Jack and Jill—like many groups that catered to the black establishment in the first half of the twentieth century—attracted a negative reaction from many blacks who lacked the resources, the pedigree, or the physical appearance to be considered for membership. History shows that some chapters, particularly the ones in the larger southern cities, were clearly guilty of placing a great emphasis on these characteristics, but others were unfairly attacked for doing the same thing when what really was happening was that they were just nominating people who were in their social circle, their church, their bridge club. And not surprisingly, these darker, less-pedigreed people had long before been shut out of those institutions.

Jack and Jill kids did not play with the kids at the Christian Street YMCA which was founded in 1889. The founding meeting was held at the Washington Square West home of William Still.

The Christian Street Historic District would memorialize a caste system that stems from slavery and the rape of Black women and girls by their enslavers. White supremacy comes in many guises, including colorism and self-hatred. Christian Street notables were “light, bright, and damn near white.” If Negroes did not have white-adjacent features or an economic status that “compensated” for their skin color and hair texture, they had to “get back, get back, get back.”