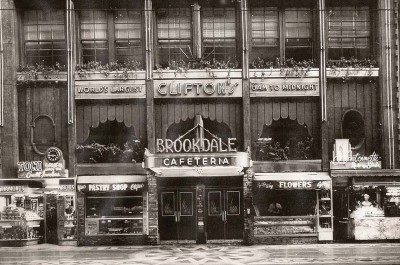 Earlier today, I attended a symposium organized by the Feinstein Center for American Jewish History at Temple University, “Sounds Jewish.” The event featured an awesome array of panelists who shared their experiences and stories.

Josh Kun recounted the story of a busboy who once worked at Los Angeles’ landmark Clifton’s Cafeteria. During a break Jimmy Witherspoon’s “Ain’t Nobody’s Business” was playing on the radio. He asked the black cook who that was. The busboy decided then and there he would write music for black artists.

And he did. The busboy was Jerry Leiber. He later became one half of the legendary songwriting and producing team, Jerry Leiber and Mike Stoller. They wrote hits for, among others, the Coasters, Drifters, Charles Brown and Big Mama Thornton.

It must have been a surreal experience for Leiber when he heard Jimmy Witherspoon’s “Real Ugly Woman” on the radio. He and Stoller wrote it.