A year ago, the Philadelphia Historical Commission rejected the nomination of the Painted Bride Art Center’s building, 230 Vine Street, for listing on the local register of historic places. The designation would have saved the city’s oldest alternative art space and one of the few extant buildings associated with Philadelphia’s jazz heyday. Jazz on Vine, the longest, continuously running jazz series in Philadelphia, was started in 1975.

If 230 Vine Street had been designated a historic landmark, Isaiah Zagar’s “Skin of the Bride” mosaic that rings the exterior walls of the building, an artwork of recognized stature, would have been preserved. 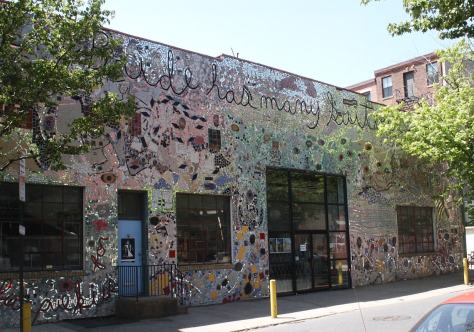 With the Commission’s controversial vote in hand, the Bride put the cultural landmark on the market. In a message, executive director Laurel Raczka wrote:

After much consideration, we have made the difficult decision to sell our building at 230 Vine. Let me be clear: The Painted Bride is NOT closing. With the proceeds of the building sale, we will secure a source of funds that will ensure the Bride can fulfill its central mission, which is to support artists who are committed to blazing paths of innovation that are transformative at the community level.

The Painted Bride is world-renowned as a vanguard institution for ground-breaking artists. We want to do everything possible to ensure that we perform that role for years to come.

Our current business model is unsustainable and hasn’t been sufficiently updated (emphasis added) to meet the needs of a transforming world and evolving audiences. We are committed to creating a new model that will allow the Bride to be increasingly responsive, flexible and agile in our rapidly changing times.

Founded in 1969, the Bride has received millions of dollars in charitable donations from local, state and federal taxpayers, foundations, corporations and individual donors. The current board of directors failed to sufficiently update its business model. Having brought this vanguard institution to the brink, the board now says it will ensure Painted Bride 2.0 is sustainable. Got it. Now tell it to the judge.

The Bride is a nonprofit organization. The proposed sale of a “charitable asset” to a for-profit developer must be approved by the Orphans’ Court and Pennsylvania Attorney General Josh Shapiro. If the Bride’s petition is approved, Groom Investment LLC will demolish the artist-centered performance space and gallery, and destroy Zagar’s iconic murals. In their place, the developer will construct 16 cookie-cutter condos for the one percent.

A diverse group of arts and culture leaders opposes the petition (full disclosure: I’m included in the group). Laurel Raczka says the Bride is “more than brick and mortar.” But place matters. 230 Vine Street is where culture was made. It’s where stories are kept. The iconic building keeps the stories in public memory and imagination.