March is Women in Jazz Month. Let’s get the celebration started at Philadelphia’s Memphis Club which opened in December 1934. 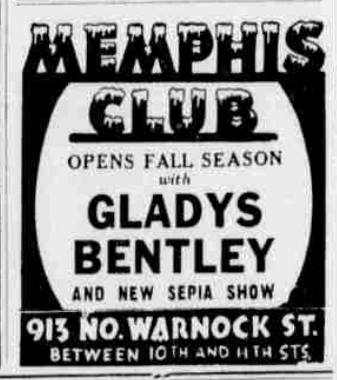 Gender-bender blues singer and pianist Gladys Bentley opened the fall season. This photo is on view at the National Museum of African American History and Culture “Musical Crossroads” exhibition.

The drag king pioneer was featured in The New York Times series, “Overlooked”:

When it comes to loosening social mores, progress that isn’t made in private has often taken place onstage.

That was certainly the case at the Clam House, a Prohibition-era speakeasy in Harlem, where Gladys Bentley, one of the boldest performers of her era, held court.

In her top hat and tuxedo, Bentley belted gender-bending original blues numbers and lewd parodies of popular songs, eventually becoming Harlem royalty. When not accompanying herself with a dazzling piano, the mightily built singer often swept through the audience, flirting with women in the crowd and soliciting dirty lyrics from them as she sang.

By the early 1930s, Bentley was Harlem’s most famous lesbian figure — a significant distinction, given that gay, lesbian and gender-defying writers and performers were flourishing during the Harlem Renaissance. For a time, she was among the best-known black entertainers in the United States.

Bentley sang her bawdy, bossy songs in a thunderous voice, dipping down into a froglike growl or curling upward into a wail. In his 1940 autobiography, Langston Hughes called her “an amazing exhibition of musical energy — a large, dark, masculine lady, whose feet pounded the floor while her fingers pounded the keyboard — a perfect piece of African sculpture, animated by her own rhythm.”

One thought on “Memphis Club”