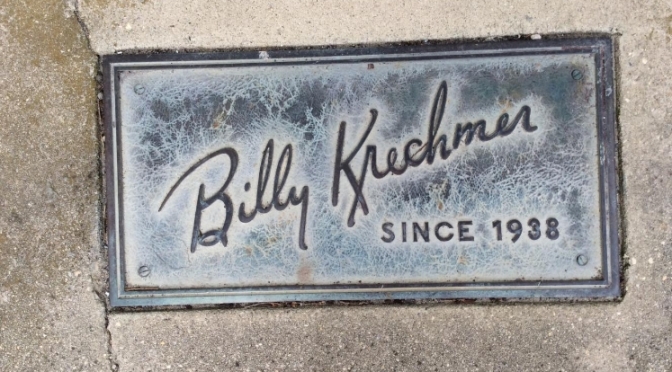 Located in Center City, over the course of its nearly 30-year history (it closed in 1966), the tiny club was also known as The Jam Session and Billy Krechmer’s Music City.

Krechmer’s club was known as a swing room in the early years. It was a place where big name jazz stars, regardless of color, would come to jam between sets or after their gigs at the major venues in town. Though, as the Dixieland revival took hold in the 1950s–and jazz began moving in directions that were less appealing to mainstream audiences–Krechmer’s became a bulwark of Dixieland. If you wanted to hear the latest in jazz from Dizzy Gillespie or Miles Davis, you had to go to clubs like Pep’s or the Showboat. If you wanted to hear Dixieland, you went to Billy Krechmer’s.

The original Krechmer’s was quite small–11 1/2 feet wide by 52 feet long, with a capacity of about 50 people. It was not a fancy place. In 1959, Krechmer purchased the adjacent property and broke through the walls, doubling the club’s size. He also added balcony seating. The club was very popular in the 1950s and early 1960s, often filled to capacity and attracting well-known players and fans of Dixieland.