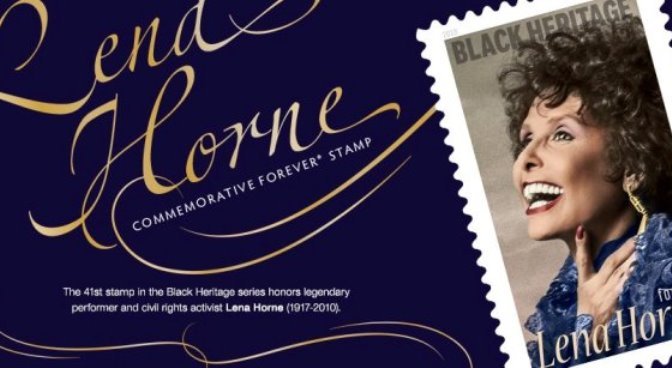 On Tuesday, the U.S. Postal Service will issue the Lena Horne Forever stamp. The 41st issuance in the Black Heritage series honors the legacy of Lena Horne:

Horne began her career as a dancer at Harlem’s Cotton Club and later became a featured vocalist with touring orchestras. The rampant racial discrimination she encountered from audiences, hotel and venue managers and others was so disconcerting that she stopped touring, and in 1941, she made her move to Hollywood. A year later, she signed a contract with MGM — one of the first long-term contracts with a major Hollywood studio — with the stipulation that she would never be asked to take stereotypical roles then available to black actors. Her most famous movie roles were in “Cabin in the Sky” and “Stormy Weather,” both released in 1943.

During World War II, Horne entertained at camps for black servicemen, and after the war worked on behalf of Japanese Americans who were facing discriminatory housing policies. She worked with Eleanor Roosevelt in pressing for anti-lynching legislation. In the 1960s, Horne continued her high-profile work for civil rights, performing at rallies in the South, supporting the work of the National Council for Negro Women, and participating in the 1963 March on Washington.

Over the years, she warmed the hearts of countless Americans with her beautiful voice and dramatic performances on screen. From the time her grandmother signed her up for an NAACP membership as a child, she worked tirelessly to further the cause of justice and equality. In 1940, she became the first African American performer to tour with an all white band. And while entertaining soldiers during World War II, she refused to perform for segregated audiences – a principled struggle she continued well after the troops returned home.

… to sweet Georgia Brown in “Cabin in the Sky” …

… and Glinda, the Good Witch in “The Wiz,” the legendary performer entertained millions.

Horne’s activism and willingness to speak truth to power inspired millions, including the writer.

The trailblazer and civil rights activist will be in the public’s memory forever. 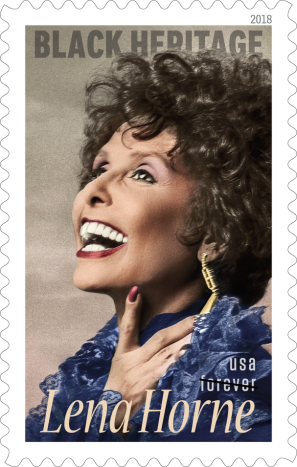 The First Day of Issue Stamp Dedication Ceremony  was held at Symphony Space in New York City. The Lena Horne Forever stamp is on sale nationwide at post offices and online at The Postal Store.

All That Philly Jazz stems from Music Hack Day, a music-related hackathon. So innovation is in our DNA. 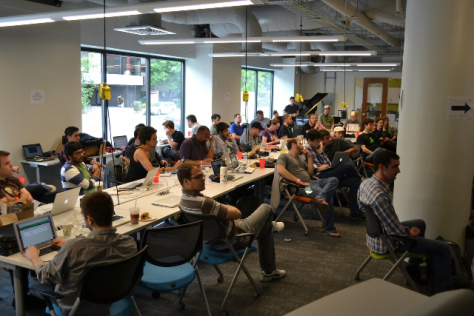 I am excited to report that All About Jazz has launched Bix the Jazz Bot, a chatbot that curates personalized online content. The chatbot was created in collaboration with Gupshup, the world’s leading chatbot and bot development platform. Michael Ricci, founder and president of All About Jazz, said:

Bix is a convenient way to get the stories and news our readers value most. Whether it’s album reviews, live reviews, or interviews, Bix is your personal guide and takes you on a deep dive into our website.

Consumers are looking for new ways to explore and engage with new and recognizable artists and content, and publishers are likewise looking for ways to retain and attract new readership. Chatbots are the future of consumer engagement, and we’re excited to work with All About Jazz to make their content accessible and available on-demand.

For information on how to access Bix, visit All About Jazz. 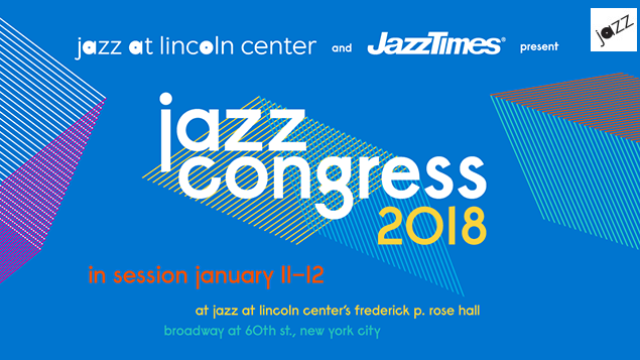 The inaugural Jazz Congress will be in session January 11-12 in New York City. Co-produced by Jazz at Lincoln Center and Jazz Times, the conference will “bring together artists, media and industry leaders in the global jazz community to exchange ideas in order to nurture and grow the jazz community and the underlying business and organizations that promote, produce, present, market and support the music.”

Jazz at Lincoln Center is excited to host this much needed community initiative. We will stimulate an inclusive environment, explore new ways to expand audiences for our music, and learn from one another. With so much discordant non-communication around the world and in our country, now is the perfect time for us to come together for serious discourse around and about our cultural, business and aesthetic objectives.

Jazz has what our modern world needs. Let us all take pride in our collective advocacy of this great music by identifying, declaring and demonstrating our common ground.

The program includes panels focusing on race and gender, and audience development. Hall of Fame basketball legend Kareem Abdul-Jabber, a jazz enthusiast whose father was a trombonist, will deliver the keynote address. Abdul-Jabbar will talk about the role jazz can play in today’s society.

I am particularly interested in the panel discussion on jazz, politics and activism. One of my objectives with All That Philly Jazz is to contextualize jazz within the framework of movements for social change. Indeed, the jazz culture was about intersectionality before the term was coined.

Some of the sessions will be livestreamed. You can join the conversation on Twitter using the hashtag #JazzCongress. For more information, visit JazzCongress.org.

Gentrification is displacing longtime residents in historically African American neighborhoods from Bedford-Stuyvesant in Brooklyn to Baldwin Hills in Los Angeles.

I grew up in Bed-Stuy and went to college in Harlem where an iconic mural, the “Spirit of Harlem,” was covered up by Footaction, a sneaker and apparel company.

Langston Hughes famously asked, “What happens to a dream deferred?”

We know what happens if we don’t fight the collateral damage of gentrification. African American cultural heritage and presence will be erased from public memory. So Harlem activists are organizing to give the boot to Footaction.

For me, it’s déjà vu all over again. In 2015, Pennrose Properties demolished the “Tribute to John Coltrane” mural in the Strawberry Mansion neighborhood in North Philadelphia.

But rather than simply lament its destruction, I made some noise in my capacity as director of All That Philly Jazz. Fast forward two years, Pennrose Chairman and CEO Richard K. Barnhart thanked me for my activism. Barnhart told me that in raising awareness of the importance of cultural heritage preservation I “made him a better person.” 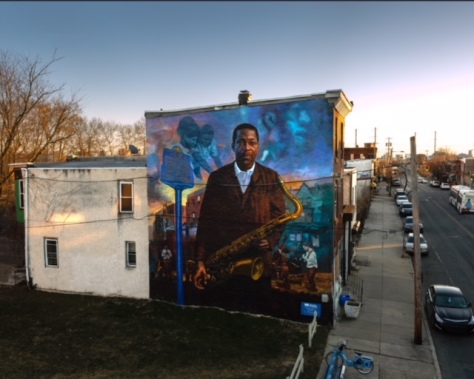 The mural was funded by Pennrose Properties and the City of Philadelphia, in partnership with All That Philly Jazz, Strawberry Mansion Neighborhood Action Committee and Fairmount Park Conservancy. 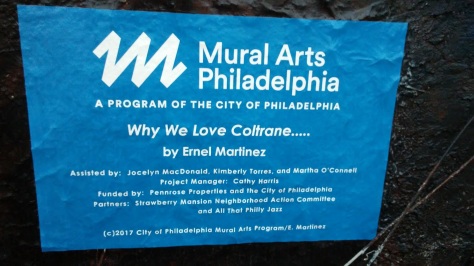 Footaction is owned by retail giant Foot Locker. Together, we can make Footaction a better corporate citizen. Let’s make some noise.

UPDATE: After making some noise on Twitter, I received a DM from Footaction.

True to its word, restoration of the “Spirit of Harlem” mural is in progress. 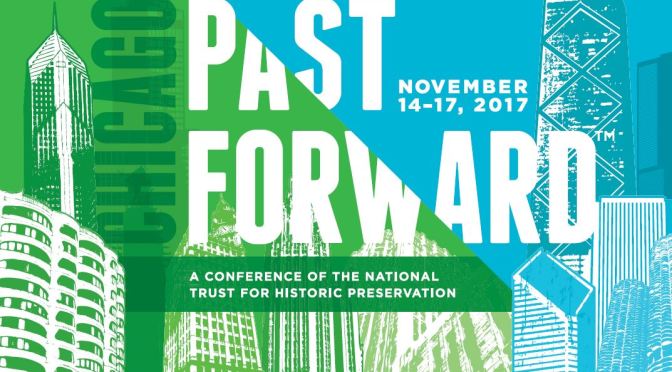 I’m going to Chicago for PastForward 2017. I am a two-time recipient of a diversity scholarship to attend the National Trust for Historic Preservation’s annual conference. But as I wrote for the Preservation Leadership Forum blog, I am an accidental preservationist:

I love old buildings. I love even more the stories that old buildings hold—they are places where history happened. To borrow a phrase from blues singer Little Milton, “if walls could talk” they would tell stories of faith, determination and triumph. For me, historic preservation is about staking African Americans’ claim to the American story.

One of my first stops will be State and Washington streets to check out the 10-story mural of Muddy Waters. 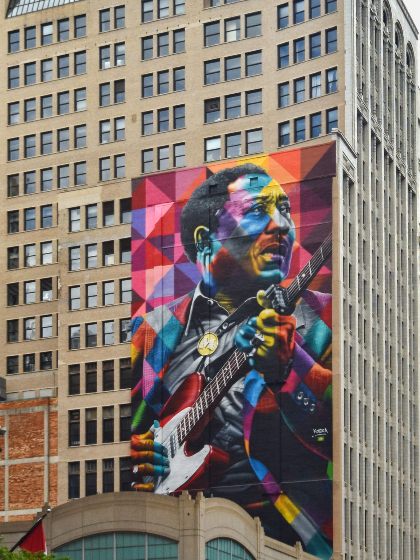 I’ll also check out the former home of the blues icon. Sadly, the 125-year-old building is under threat of demolition.

Discussions on reUrbanism, preservation and health, and technology will be live streamed. You can sign up as a virtual attendee for free. You can also follow the conversation on Twitter using the hashtag #PastForward17.

While in the Windy City, I will use the CTA to get around. NEA Jazz Master and Philly naive Jimmy Heath composed “CTA.” Miles Davis said it was named after Heath’s then-girlfriend Connie Theresa Ann. 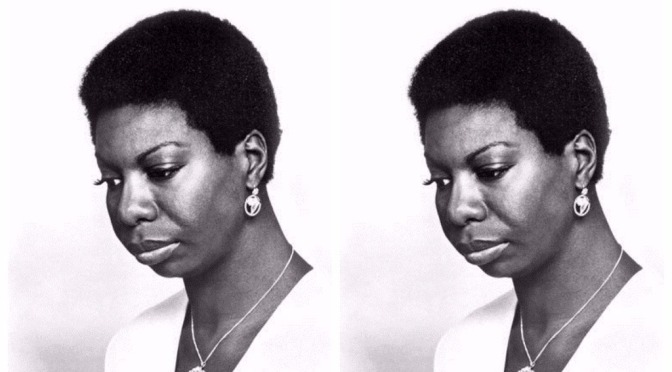 The High Priestess of Soul has been nominated for induction into the Rock & Roll Hall of Fame:

Nina Simone’s unapologetic rage and accusatory voice named names and took no prisoners in the African-American struggle for equality in the early 1960s.

Her triumphant voice sang what it meant to be young, gifted and black in a sometimes unjust and troubled world.

Information on the induction process is available here. Fans can vote for up to five nominees once a day. Voting is open through 11:59 p.m. on December 5.

As of this writing, Ms. Simone is trailing behind in fan votes. 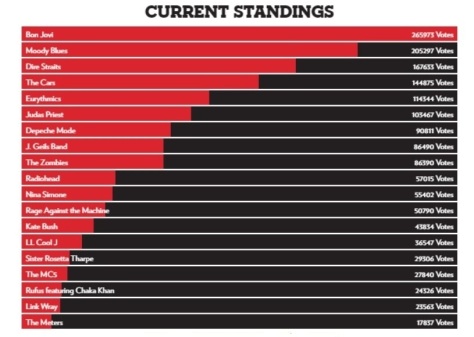 An unvarnished truth-teller, Nina Simone worked her magic “for the whole round world to hear.” Let’s show her the love that’s in our hearts. Vote early and often. 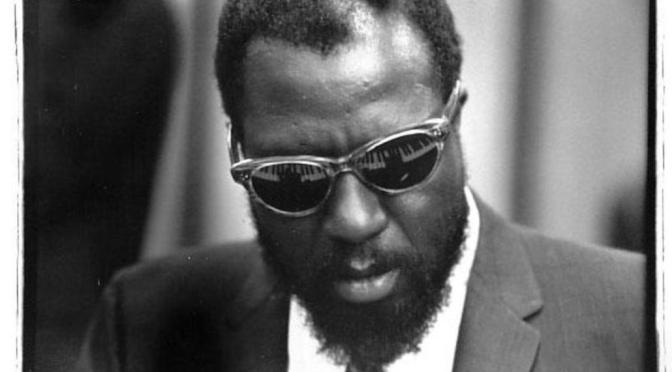 This year is the centennial of the birth of Thelonious Monk. Monk’s 100th birthday is being celebrated across the country.

For Philadelphia, one day is not enough. Starting at midnight on October 10, WRTI will play his most recognized composition to start off every new broadcast day for a whole year. The station will not have to hit repeat since there are more than 1000 versions of “’Round Midnight.” Fittingly, Monk was a classically trained pianist.

One of my most memorable experiences was attending Monk’s funeral in 1982. The homegoing service was held at Saint Peter’s Church in New York City. Musicians played version-after-version of “’Round Midnight.” It was a loving tribute to the man who composed the most recorded jazz standard in history.