After the Civil War, North Broad Street became one of Philadelphia’s leading addresses. North Broad was attractive to wealthy industrialists for two reasons. First, many of their factories and mills were located in nearby industrial areas. Second, the old money crowd in Rittenhouse Square snubbed their noses at the nouveau riche businessmen.

The brownstone mansions that lined North Broad were built to house the families of the industrialists. Between May 1912 and June 1913, the Loyal Order of Moose Lodge 54 acquired three brownstones to establish a new clubhouse. The buildings were renovated with the addition of an auditorium and ballroom. 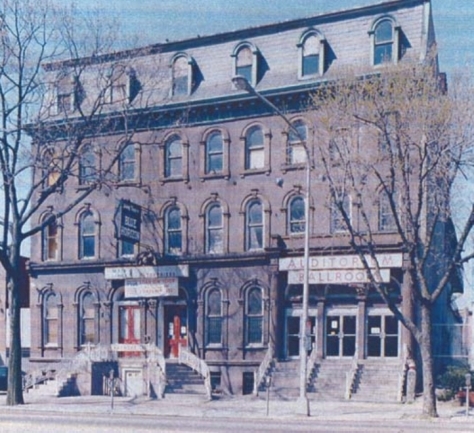 The Philadelphia Historical Commission added the Legendary Blue Horizon to the local register of historic landmarks in 2015. However, only the Broad Street façades were protected. Four years later, Orens Bros. is back before the PHC Architecture Committee to seek final approval of its design of the front façades. The developer plans to demolish the brownstones and construct a hotel.

PHC staff recommended the Committee deny final approval of the design. And indeed it did. The Architecture Committee voted to send the developer back to the drawing board.

The Legendary Blue Horizon is one of the few extant buildings associated with Philadelphia’s golden age of jazz. Before it was a beloved boxing venue, it was an entertainment destination. Duke Ellington performed in the downstairs ballroom that was added on by Philadelphia Lodge No. 54, Loyal Order of Moose.

The Legendary Blue Horizon holds a special place in the hearts and minds of Philadelphians as evidenced by its depiction on the Philadelphia Courthouse Mural commissioned under the Percent for Art Program. As you can see, the iconic stairs figure prominently in Philadelphians’ memories. 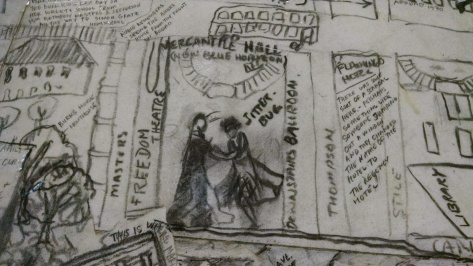 I posted the recent Philadelphia Inquirer report about the Orens Bros. proposal to All That Philly Jazz’s Facebook page. The post has gone viral. Why? This place matters.

The proposed hotel is appropriately named since it takes a lot of moxy to seek approval to cheapen a beloved historic landmark with modern add-ons, materials and signage. The proposed design erases the historic character of the front façades.

I agree with the Commission staff that the applicant’s design does not comply with the Secretary of the Interior’s Standards for the Treatment of Historic Properties. It would make a mockery of historic designation if the Committee voted to ignore the standards.

I recognize that financing of the project is outside the purview of this Committee. That said, it is important to note that in an earlier iteration of the project, Orens Bros. received $7 million in grants under Pennsylvania’s Redevelopment Assistance Capital Program (RACP) for what was then an $18 million project.

Of the $7 million in state grants, Orens Bros. drew down $748,578; the balance of the grants expired. The applicant spent nearly three-quarters of a million dollars in taxpayers’ money and walked away without sealing the buildings. The historic landmark is now exposed to the elements.

The first round of RACP funding applications closes on January 31. I fully expect Orens Bros. will again rattle the cup for a public subsidy for its now $22 million project. If the proposed design is approved, Philadelphians and other taxpayers would effectively pay for the demolition and defacement of a beloved historic landmark.

Orens Bros. Real Estate does not care about the Legendary Blue Horizon, but this Committee can make them care. The application should be denied on the grounds the proposed design does not comply with the Secretary of the Interior’s Standards for Rehabilitation, specifically Standards 2, 9 and 10.

The applicant should go back to the drawing board and develop a design that does, in fact, preserve the front façades and respect their historic character.

Orens Bros. can appeal the Architecture Committee’s decision to the full Philadelphia Historical Commission. Or they can accept the “denial with hope” decision. Stay tuned.